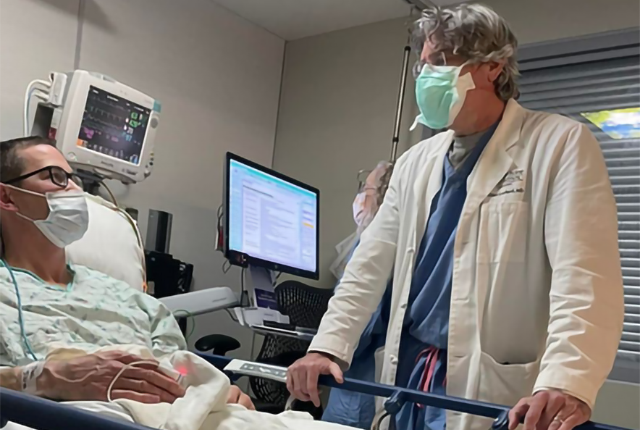 Cody Pickett, 41, had no reason to think his health and fitness were anything but top-notch.

He’s stayed within 10 pounds of his playing weight of 220 while he quarterbacked the University of Washington Huskies two decades ago (2001-03). And for years he has worked out several days a week and practiced with the high-school basketball team he coaches in Idaho’s Boise Valley. So Pickett’s jaw dropped when he learned late last year that he had a severe blockage of a cardiac blood vessel and, a month later, was told that the repair would require open heart surgery.

That was Dec. 30.  His wife, Carleigh, shared the experience on Facebook, expressing their anguish and asking friends for prayers.

As happens with social media, Carleigh’s social media post was re-shared and came to the attention of another ex-Husky, punter Channing Wyles (1988-90). Wyles manages accounts for Abiomed, a company that makes heart-assist devices. He knows Dr. Bill Lombardi, a cardiologist at the UW Medicine Heart Institute who happens to be an expert at catheter-based (nonsurgical) approaches with complex heart anatomy.

Wyles connected the Picketts with Lombardi and – bing! – the second opinion resulted in a successful stent-placement procedure on Jan. 10 at UW Medical Center in Seattle. Wyles, who had never met the couple in person, waited with Carleigh during Cody’s 45-minute procedure.

“There are a lot of people you can stent and get the same outcome as if they had bypass surgery, but they’re only told you can only have bypass surgery,” he said. “Every year hundreds of thousands of people get medical care and are told that they have only one option. Patients don’t have context to know whether that’s an accurate statement, but they can get that context with a second opinion.”

Admitted to UW Medical Center on Jan. 10, Pickett had the procedure that day and left the hospital four hours later. He was back coaching his basketball team on Jan. 12. By contrast, cardiac bypass surgery would’ve meant three to five days in the hospital and very restricted activities (e.g., no driving) for a month. “It usually takes six months to fully know your outcome,” Lombardi said.

Pickett knows how lucky he was. Had it not been for his wife’s Facebook post and the kindness of a fellow Husky he had never met, he would be facing a much more arduous near-term future.

For the full article on Cody Pickett's surgery, head over to UW Newsroom.